THE BALLARD’S TO RECEIVE THE PRESTIGIOUS BBIA INDUSTRY SERVICE AWARD

ARLINGTON, TEXAS – Two of bowling’s greatest competitors and personalities, Del Ballard and Carolyn Dorin-Ballard, will receive the 2022 Billiard and Bowling Institute of America’s Industry Service Award, an honor given to those who promote and play a role in growing the bowling and/or billiard industries worldwide. “This tandem has earned a multitude of accomplishments both, on and off the lanes for decades. They both share their wealth of knowledge and expertise with thousands of current and prospective competitive bowlers through their various coaching and event appearances,” said BBIA President Andy Brenneman. “Their nonprofit organization, Ballard vs. The Big “C”– Striking Back to Spare More Lives, has raised awareness and more than $500,000 in donations to help fight cancer.”

During their time as professional bowlers they certainly made a statement on the tour. Del holds 13 PBA titles and is a member of both the PBA and USBC Halls of Fame. Additionally, Del continues to serve professional bowling as one of the industry’s foremost player representatives. Carolyn is a three-time Collegiate All-American while leading West Texas State University to two national championships. As a professional, Carolyn has 20 professional titles, was named “Bowler of the Decade” (2000’s) by Bowlers Journal International, earned “Player of the Year” honors by PWBA, and is a member of the USBC and PWBA Halls of Fame.

“Del and I are humbled to receive such a great honor, especially to be joining such an elite list of prior winners,” Carolyn said on behalf of Del and herself. “And because of the generous people who comprise the industry, we were able to leverage the fun and excitement of bowling into a fundraiser that has provided funding to people in need who battle cancer. We share this award with our Bowling Versus the Big “C” team and the supporters of the event.” When not competing and fighting cancer, Del and Carolyn run a successful pro shop, Ballard’s Bowling Academy, Fort Worth, Texas, and have a 17-year-old daughter, Alyssa. The married couple will receive the award during the closing dinner of the 2022 convention, which will take place in Cancun, Mexico, at the Omni Hotel, May 1 – 3. For tickets to the event, please contact BBIA Executive Director Bill Supper. 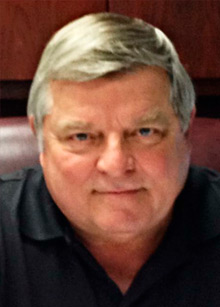